When photographer Jonathan Knight peers through his viewfinder, he’s looking for something different. And sometimes that something different takes a while. His desire to observe the emotional layer of experience has led him to long exposure landscape photography—where he can leave his lens open to chronicle the feeling of a moment, rather than produce the precise record of a single instant.

Raised in the Midwest, Knight attended Kansas State University’s reputable photojournalism program, climbing the ranks at breakneck speed, shooting sports journalism for renowned publications and news outlets within his first year of schooling. Apprehensive about the future of the field, Knight left the journalism program and went on to complete degrees in architecture and urban planning. After a decade of hustle at leading global firms, he took a sabbatical that precipitated a full lifestyle and career change. He left his job, picked up his camera, and started taking months-long trips across the country, coming home with black-and-white images of the natural world that are stunningly spare and surreal.

For some, the charm of a photograph is in its ability to freeze a split-second depicted in painstaking detail. Knight is devoted to the opposite. His work—of sand dunes, waterfalls, forests, and piers—shows a world that is not stuck, but continuous. In this way, though abstract, his photographs represent a more accurate vision of reality. They are pictures of time itself. Where everything felt can be seen all at once.

We chatted with Knight about his formative experiences as a working photojournalist, the link between the environment and our emotional lives, and the technique that has come to define his practice. 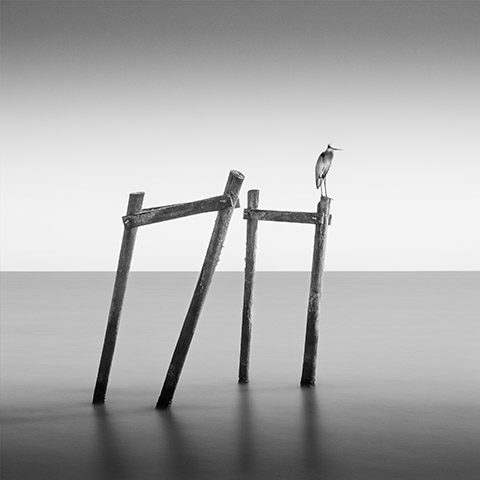 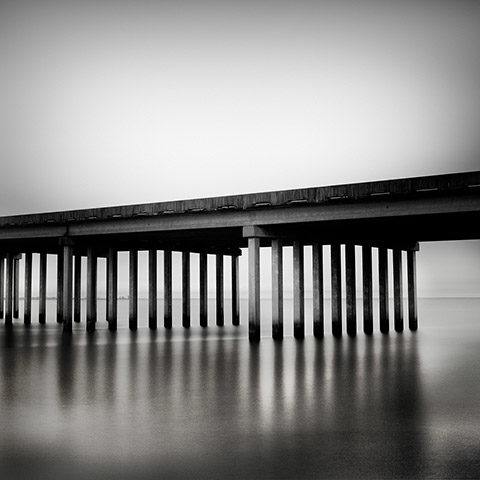 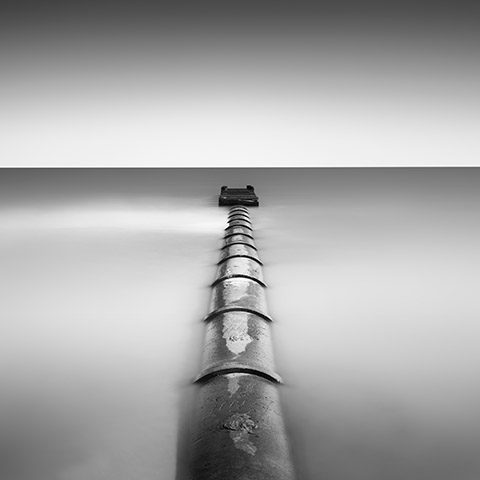 What’s your earliest experience of taking photographs?
I took an elective in high school and that was really the beginning. I borrowed an old 35-millimeter film camera that we had laying around at home and learned how to shoot film. My high school was built in the early 2000s and it was probably one of the last high schools ever built with a dark room. The teacher really fought for that to be included. So I learned on film, but pretty quickly switched to digital after those first experiences. But I still love the dark room and that analog way of making photographs.

What did you love about the dark room?
I loved the hands-on part of it and the experience of seeing a print come to life. You don’t always know what’s about to happen, and seeing it develop in the pool of chemicals is pretty amazing. I wish more people would learn that now—the burning and dodging and getting your hands dirty way that really makes you appreciate the craft. Digital photography is so much more about the back of the camera and what’s on the screen.

You’ve had a career as a photojournalist, an architect, and now a fine art photographer. How has your mainstay interest in photography shown up for you and changed across these fields?
I went to Kansas State University for college as a journalism major and quickly became a sports photography specialist within a year or so. I was shooting for the Associated Press for national news publications. Kansas State is not a well-known school by any means, but it has a reputation for really good photojournalist alums, like Pete Souza, Obama’s White House photographer. But I was also in school at a time when the industry was changing, in particular news journalism. All these famous photojournalists would visit campus and tell us to get out of journalism. So despite all the things I most wanted to do in life, I went a different path and got degrees in architecture, landscape architecture, and urban planning.

I worked for some of the best architectural firms in the world but got burned out very quickly and took a sabbatical and went to Europe as you do as a person in your late-20s trying to find yourself. I went to the Fotografiska Museum in Stockholm and saw some work by black-and-white photographers. And something just hit me in my soul—I was like, I need to get back to doing this. I’d had some mental health issues in my 20s and being able to go back to photography has helped me a lot in terms of my anxiety and depression. It’s been really great to have my own practice and grow my business at my own speed these last few years.

What led you to photojournalism rather than commercial photography?
I’ve always been interested in people and places and everyday life. Photojournalism gave me an opportunity to document people in their good moments, their bad moments, the moments in between. I’m very interested in how we form emotional ties to certain events and places in the world. Photojournalism also marks time, and as a person making photographs, you’re marking your own time in a similar way. I often look through my archives and just kind of enjoy thinking about those days and the people that I was talking to. It’s just a cool way to record your own history.

I think that’s where the fine art landscape photography comes in too—I want to showcase the emotional essence of places and our responses to them.

I’m curious about that connection you feel between the landscape—something we experience externally—and emotions, which are internal. Why do you think landscape touches our inner lives so much? And how do you go about capturing something so slippery?
Outdoor experiences are something we’ve had as a species throughout our evolution. We’re naturally outdoor creatures even though we spend most of our time indoors now, so I don’t know if there’s as much of a divide as we sometimes think. Landscape photography can remind us that we’re part of the bigger world. Nature is important in people’s lives for health benefits, especially mental health benefits, which is something that’s close to my heart.

I work hard to tie the emotional experiences that I’m having at the moment as I’m setting up a photo or walking around a location and channel them into the photograph that I make. So is it light? Is it dark? Is it dramatic? Is it calming? Is it soothing? What am I experiencing right now? And then I can develop the photograph in a way that echoes those feelings. You can make a beach photograph very, very dark, or it can be very, very light. You make a lot of choices in the camera and can match the photographic exposure to the emotions.

A few years ago you started doing long exposures to create even more mood and emotion. What compels you about this way of working and the quality of images that it produces?
Almost everything I shoot now is long exposure photography, which not only heightens the ability to record emotion, but it also records an element of time, which is not as easily done in a static image with a fast shutter speed. Long exposure allows you to see something that you don’t see with your naked eye, which is the passage of time. The photograph is of something beyond present reality while still being a real scene.
For instance, if you stand on the beach for five minutes you have the waves crashing, birds flying overhead, the clouds moving. I can capture all of that, anything and everything that could happen within those five minutes, in one photograph. We really can’t see our life like that, all at once, but in these images you can feel how it felt to be there and live it.

And what are you doing in those five or ten or twenty minutes when the camera lens is open?
That’s a good question. Pacing around, counting cars, counting birds. Sometimes people walk in front of the camera, but because they’re not there for long, they don’t usually appear in the photo—which is another interesting element of it all. I just reflect on the location, and then when I’m working in Photoshop later I can recreate the thinking and feeling I was doing at the time.

Your work has a really strong visual language made up of line, light, repetition, and rhythm. Is there one of those elements that you like to work with more than others, or does it just depend on what the image requires?
Texture is something that I think about a lot in my work. Texture allows you to work with subtle tone variations. That said, I always tend to the extremes, and I don’t really like middle grays. I also like to challenge what’s perceived as an ideal time of day for taking photographs. My recent work is all taken at night; right now I’m working on a series of waterfall images taken at night. Challenging conventions allows me to create something unusual.

My Heaven & Earth series, which I took in the dunes of Death Valley, is unique in terms of the compositions. Several of the photos were taken during sandstorms, which is the time when most photographers are like putting their camera gear away. I’m like out there in the wind and getting beaten by sand in order to capture something that people aren’t used to seeing. I’m not interested in the quintessential Grand Canyon or Maroon Bells photos.

I took photos in Death Valley for three weeks, getting up before dawn and hiking two or three miles into the dunes. It would still be dark, I wasn’t able to see anything, and I would arrive exhausted. As the sun came up I’d experience the most peaceful emotions—just experiencing what it is to be alive on earth. I always remember that time as the beginning of my fine art career.

How have you kept your inspiration up when you’re not traveling to shoot a new series? Are there certain photographers or artists who have been influential, or who you look to in order to keep momentum up?
I look at the work of black-and-white photographer Michael Kenna a lot for inspiration and self-education. The photographers Josef Hoflehner and Hengki Koentjoro are also go-tos, as well as the abstract expressionist painter Mark Rothko. I’m always trying to figure out how his color field paintings could translate to black-and-white photography—like how I could make a long exposure image that looks like two planes of tone with a horizon line in the middle. I’m edging more and more toward abstraction and minimalism and thinking about how you can use the camera to create almost entirely abstract compositions that don’t have an immediate subject or relate to any particular object in the world.

Why do you think humans are so drawn to abstraction?
I think it has to do with sensing an emotional appeal that you can’t easily read into. Abstraction allows us to bring something very personal to an image, which isn’t easy to do when an image is super realistic, like a portrayal of a very specific location. It’s like music, it’s open to more interpretation. And it changes over time. Depending on the day, I can see something different in abstract work that echoes my own emotions at the time. I want the viewer to be involved in looking at the photograph—wanting to get up close, wanting to investigate. I love the idea that the same photograph can have multiple meanings, and in that way is always going to be more than just one photograph.